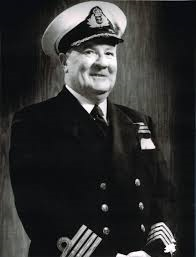 Reginald Jackson was born in 1906 in Wales, United Kingdom. He came to Canada in 1909 with his parents.

In 1923, at the age of 17, he joined the Royal Canadian Naval Volunteer Reserve (RCNVR) as a telegraphist in the Calgary Half  Company as one of its original members. Reginald Jackson was commissioned as a Sub-Lieutenant in 1931, and thereafter held the following commands: During the Second World War Lt(N) Jackson took part in the Battle of the Atlantic, rose through the ranks, and later received the Order of the British Empire (OBE) for his distinguished service. Shortly after World War II, in 1946, he was promoted to Commander, and was appointed Commanding Officer of HMCS Tecumseh. He was promoted to the rank of Captain in 1950, while CO of HMCS Tecumseh.

Captain Jackson was nicknamed “Cowboy” because he was a prairie sailor.

“In war and in peace, for twenty-two years, this Officer has given unstintingly of his time and effort to the Royal Canadian Naval Volunteer Reserve. He has at all times served faithfully and with great credit to the Service in command of Naval Divisions ashore and of His Majesty’s Canadian ships at sea. It is largely due to the vision and untiring loyalty of Officers of the calibre of Commander Jackson that the Volunteer Reserve has been able to make such a magnificent contribution to the success of Canada’s war at sea.”

In 1955, our corps was named after Captain (N) Reginald Jackson, on the occasion of the 50th anniversary of the Royal Canadian Naval Volunteer  Reserve. Captain Jackson passed away in 1978.